Learn To Play The Piano

Most people know how to make a piano produce sound. But there is quite a difference between hammering down the white keys and coordinating two distinct rhythms in the right and left hand, while using a foot to control the damper pedal at a staggered pace. Although the piano - and the grand piano in particular - may seem large and overwhelming, the path to playing easy melodies and beautiful chords is thankfully not long.

We have made this guide to the piano so that you can quickly gain a basic understanding of the instrument. You will also get tips on how to find the right piano teacher for you. Look here if you want to get started with piano lessons right away.

See all of our qualified piano teachers here!

Different Styles of Piano, from Classical to Pop


The piano has always been, and still is, the favoured instrument of classical composers, especially when it comes to writing and arranging new music. This is primarily due to the piano's ability to play several voices at the same time, but also its timeless sound, which tends to give everything played a "classical" sound. Classical piano music is everything from "Für Elise" to beautiful chamber music, to massive symphonies, and it is typically associated with composers such as Beethoven and Chopin, and solo players in expensive suits. 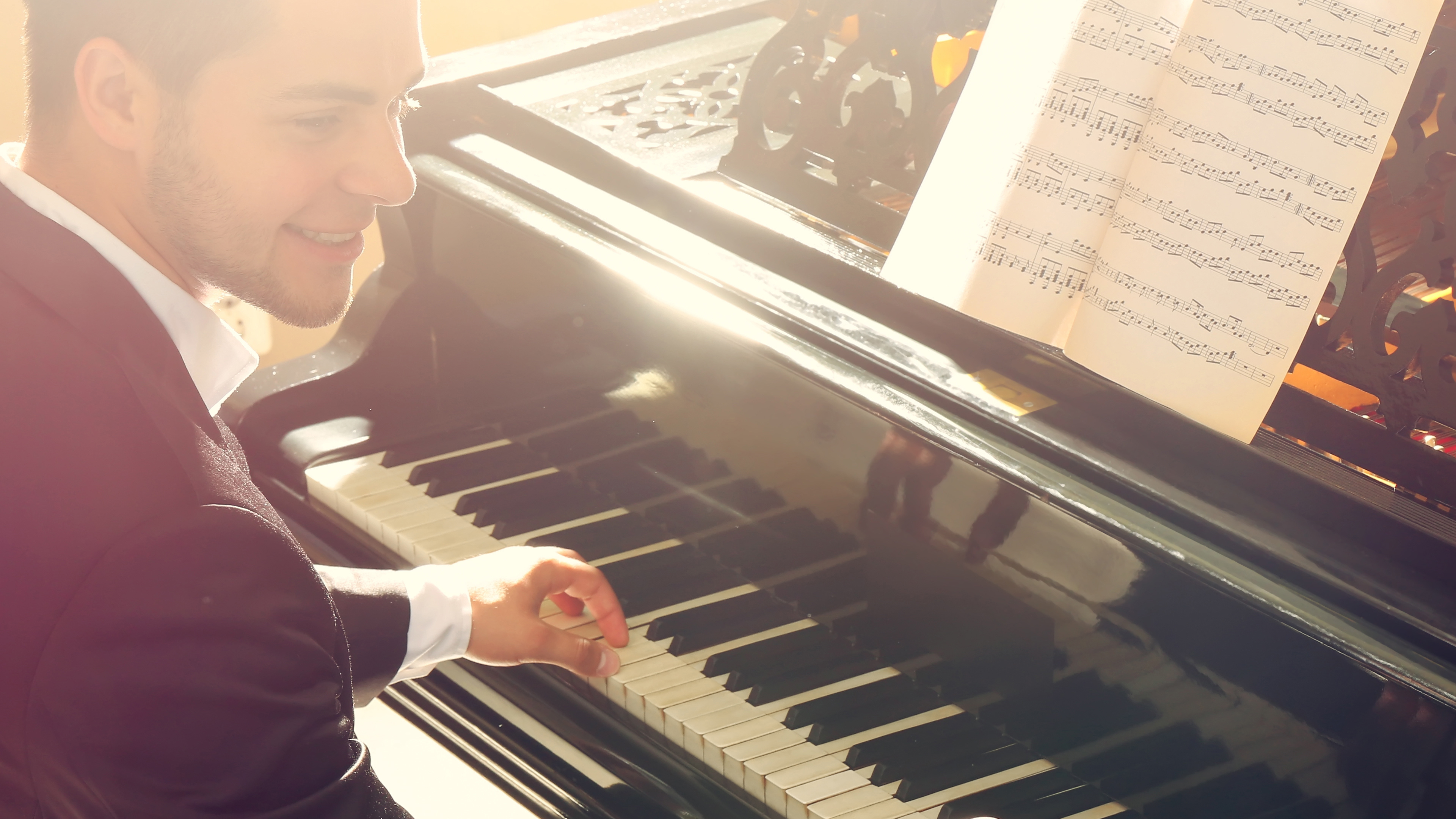 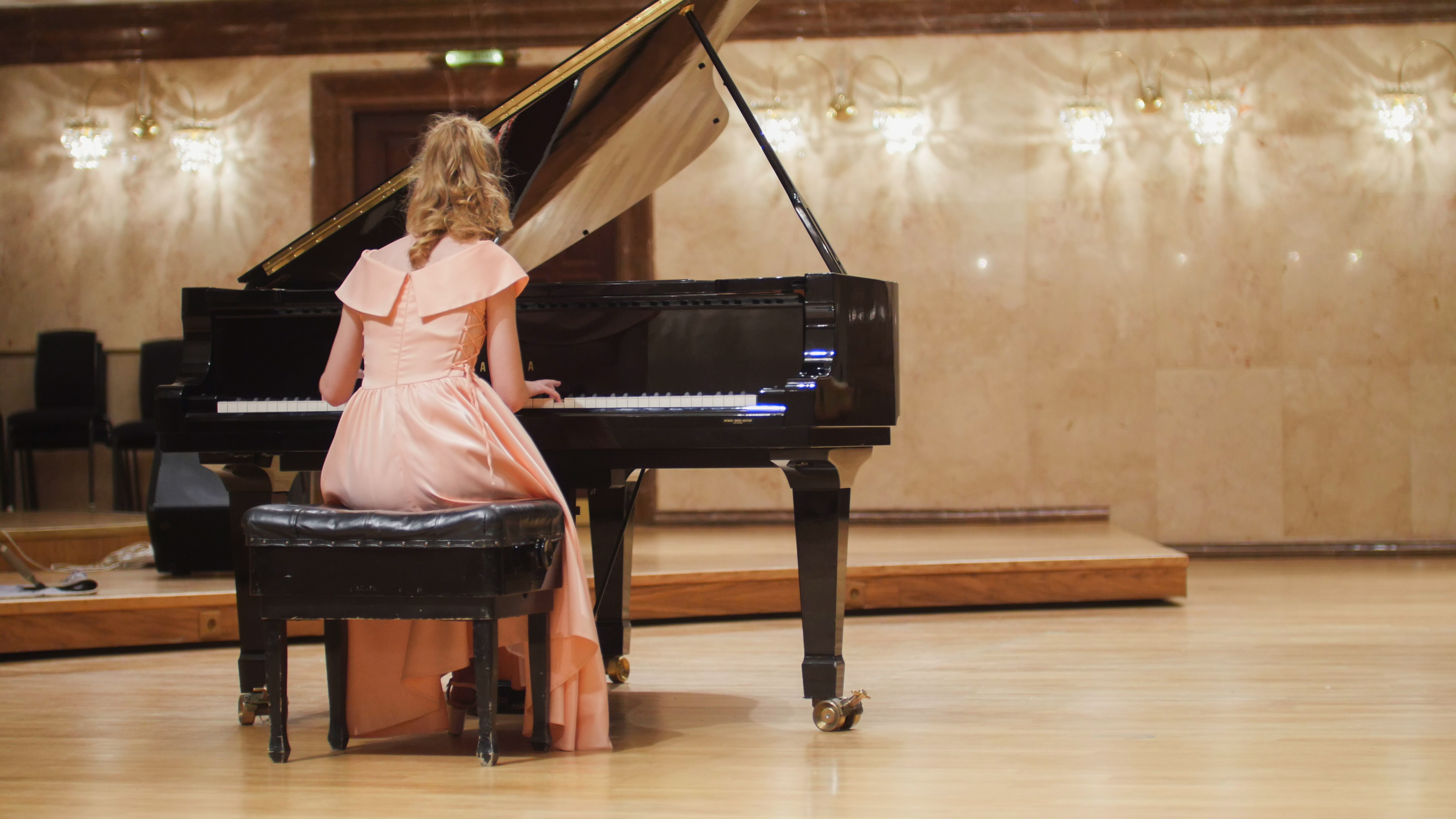 At the other end of the spectrum we have contemporary piano, which brings to mind everything from jazz jammers and pop pianists to songwriters and synth players. Today, the piano is present in almost all genres of music, from pop, to hiphop, and even in some genres of metal. Whether it is for providing background accompaniment or stepping into the spotlight as an instrument for soloing, the piano is as popular as ever.

Anatomy Of The Piano


The piano consists of a number of black and white keys, as well as some pedals located by the player's feet. When the player presses a key, sound is produced by a small hammer hitting a string inside the piano. The volume is determine by how hard the key was pressed, whether the lid was on or off, and whether or not the "Soft"-pedal was pressed as well.

The keys on a piano as can be likened to those on a computer - they each represent a letter or, in the case of the piano, a note. Between each key, there is a semitone, also known as a half-note. In other words, from one C to the next (One octave higher), there are 12 semitones. In other words, there are only 12 notes on a piano, which are then repeated octave by octave.

In this picture you can see the names of the notes. The notes written in blue can have one of two names, depending on which key a composition is played in. They can be written with a "#" (called a "sharp"), as seen in the picture, or with a "♭" (called a "flat"). Sharps and flats are known as "accidentals".

Here you can see what the notation of notes with sharps looks like. Notice that some of the notes do not have a sharp variant. These are the notes B and E:

Here you can see what the notation of notes with flats looks like. Notice that some of the notes do not have a flat variant. These are the notes C and F.

Every key on the keyboard has a basic sound when you press the key. The note rings out longer if you keep the key pressed down, and it stops once you release the key. However, there is another way of controlling the length of the note.

When you are sitting at the piano, you will have one to three pedals at your feet. Most pianos will have two pedals as a standard. These are the sustain-pedal (on your right) and the damper pedal (on your left). The sustain pedal will let the notes you play ring out, even if you let go of the keys, and they will keep ringing until you release the pedal. The damper pedal dampens the volume and the frequency, allowing you to control the dynamics of your playing.


It is possible to play chords, which are groupings of multiple notes played simultaneously. In song books, it is common to see letters written above the musical notation. These reference the names of the chords to be played with the melody. In the example below, the "C" refers to the chord C major, and not to the note C. These are known as chord symbols.

A chord can be composed of many notes, although it should at a minimum have three chords. The name of the chord is determined by the notes included.

We are going to keep things simple, and will look at triads, which are the easiest chords to learn and understand when learning to play piano.

The fifth is, as you may have guessed, the fifth note of the scale, when counting from the root note. 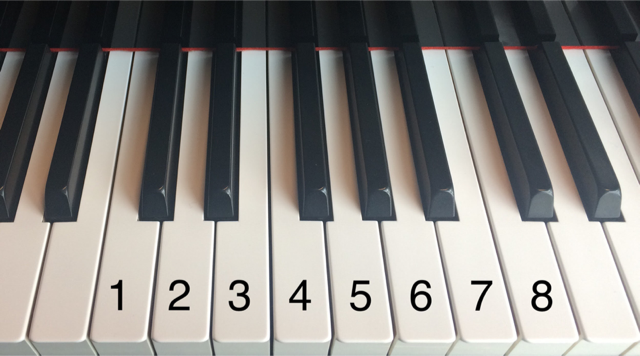 Once you've become familiar with basic triads, you can try taking the next step. The system for putting together chords is based on ascending thirds (Always moving up one third from the note you are currently on), and once you understand this logic you will be able to figure out most types of chords.


Should you choose an acoustic piano or a digital piano? Here are some things to be conscious of when choosing the type of piano you want:


1. Practise - the Key to Success on the Piano

You will gain more from practicing ten minutes every day, than you will by practicing for one hour, once a week. Daily praciticing also helps condition your fingers.

2. Play from the Heart

It may sound like a cliché but the most important thing when learning the piano is to not lose sight of what made you want to learn in the first place. Follow that feeling you get when you hear the piano played beautifully, and strive for that. Enjoy playing - play something you like to play! Don't worry too much about what you're trying to achieve and stay relaxed – playing piano should always be fun.

3. Use Your Hands Correctly

It's really important to use your hands correctly to get the best possible sound from the piano. Technique is also important for avoiding injuries and strains when playing and practising. It often takes time to adjust and you have to be prepared for this. Using one of our great piano tutors is the best way to ensure technique is embedded from day one! The right piano teacher will be able to make this process fun and enjoyable - just like learning to play the piano should be! Your piano lessons should be something you really look forward to in the week. Practice is the same, piano lessons with a professional piano teacher should ensure that there is a strong connection between the work you do at home and the piano lessson themselves.

Learning to play the piano means learning to play without tensing your wrists, forearms, elbows and shoulders. If you feel discomfort in your hands or arms, make sure to take a break. While you may find your limbs getting tired quickly to begin with, you will be surprised at how quickly your body gets used to it.

Take a leap into something difficult – and divide it into smaller pieces. Start by playing just the right hand part. Then try just the left hand. Finally put both parts together! Ask your piano tutor for help in breaking down your favourite piece in this way.

Easy Songs To Play On Piano


If you already own a piano, or perhaps a keyboard, and you just want to start playing songs, then take a look at some of our tutorials for songs which are easy to play on the piano:


Do you want to learn how to play the piano? Maybe you already know, but you want to improve your abilities? We have lots of talented and experienced teachers all over the country. Find a teacher in your city today!


See all of our qualified piano teachers here!

If you thought this article was useful, you might also find the following interesting…


The office team of MusicTutors are all professional musicians and educators. We also believe that we have the best job in the world. We get to spend our day talking to students across the country about how much they love music and we have helped hundreds of people connect with the perfect, professional tutor for them. We'd love to help you too! Please get in touch with us and tell us your story. 07946125613 Or send us a mail to [email protected]. We can't wait to hear from you!


By using Musictutors.co.uk you accept our cookiepolicy.